Lets Talk About No. 7

Seven is a number. An odd number but beautifully strange.  Not only is it an odd number,  there are countless attachments it has enjoyed over the years. Let’s look at some of the sterling and outstanding attributes of the No. 7.

Football Jersey No. 7
On the soccer pitch, the Jersey No. 7 has been worn by some iconic footballers who decided some games and as play makers. Jersey No. 7 is worn by the right winger in most teams and they are attackers scoring goals or causing havoc in any defense. In Nigeria,  two national player who wore the Jersey No. 7 were destroyers – Segun Odegbami nicknamed Mathematical Odegbami and George Finidi. Once the Jersey No. 7 is mentioned,  names like David Beckham of England,  Raul Gonzalez of Spain,  George Best of Ireland,  Cristiano Ronaldo of Portugal to mention a few. Festac 77
Festac 77 was the Second World Black And African Festival of Arts and Culture hosted by Nigeria in the year 1977, Venue – Lagos. The event, it’s second was hosted in Lagos Nigeria as it’s first edition was held in Dakar the capital city of Senegal. The event was an assembly of artists from all over the world for a 30 days extravaganza. It is on record that Festac 77 brought together a whopping five hundred thousand [500,000] visitors and participants to Lagos. One lasting legacy reminder of the event is the popular Festac Town – it was the official quarters of the contingents to the 30 days of glory. 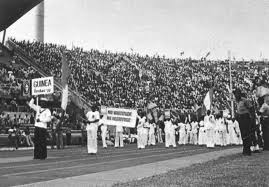 Egede 77
In Nigeria,  there is a popular group identified with the nomenclature – Egede 77, the Black Axe  –  The Neo Black Movement. The name coincides with the day the group was founded. The groups symbol is a raised clinched fist and an axe. The black clinched fist according to its members suggests power. Some unrest in Nigerian higher institutions associated with cultism is attributed to the group. On a lighter note, they have some sonorous songs that will make your day. Their colour is yellow and black.

Matthew 7 v 7
This verse of the Holy Bible is one of the most memorized and quoted verses of the Christian holy book. To test people’s knowledge of the Scriptures, people are asked to adhere to Mathew 7 v 7 today and always. Unfortunately many do not know the content of the verse. The verse simply asks you to make a request and you will have. That Biblical verse simply say : ASK. A – ask, S – seek, K – knock and the door will be opened for you.

7 days of the week
The Gregorian calendar used today all over the world has 7 days, Sunday to Saturday. The Holy Bible recorded that God created the world in 7 days and rested on the last day being Saturday.

Baba 70
One of the greatest musical legends that has graced this planet earth, Fela Anikulapo Kuti is popularly known as Baba 70. Fela was and is a character you can hate but love. He is the originator of Afro Beats. May be his general personality has a lot to do with the Baba 70 alias.
Fela was a phenomenon.  He married lots of wives,  held concerts worldwide that displayed rare finese,  criticized the bad government of Nigeria extensively,  he went to jail often but came out more vociferous,  smoked Marijuana openly et al. It is an opposite that his father was a clergyman and the mother an activist.

7 is a magic number
In the mystic world, 7 is a reverred  number. They are of the opinion that it is a lucky number. Thus including it in anything you intend to achieve boasts your chances more. There are 7 Wonders of the world, also there are 7 continents in the world.